This Ph.D. dissertation is an analytical and empirical study of using history of mathematics in mathematics education.

The analytical part consists in proposing two categorizations based on a literature survey, one for the arguments of using history (history as a tool and history as a goal) and one for the approaches to doing so (the illumination, the modules, and the history-based approaches), and then analyzing the interrelations between these `whys’ and `hows’ of using history in order to see which combinations appear the most favorable if one wishes to realize a certain why.

Based on this, a modules approach is chosen to fulfill the purpose of using history as a goal in the new Danish upper secondary mathematics program. Two historical modules are designed and implemented in a particular upper secondary class, the first module in the students’ second year and the second in their third and final year. The purpose of the empirical study is to see whether students at upper secondary level are (1) capable at engaging in meta-issue discussions and reflections of mathematics and its history, (2) if these discussions and reflections in any way are anchored in the taught and learned subject matter (in-issues) of the modules, and (3) if such modules in any way may give rise to changes in students’ beliefs about mathematics (as a discipline) or the development
of new beliefs.

Based on videos of the implementations, students’ essays, mathematical exercises, questionnaires, and followup interviews, the conditions on and ways in which the students are able to carry out and engage in meta-issue discussions and reflections are analyzed and discussed and so are the levels of anchoring of these in the related in-issues. In particular, four different levels of the students’ discussions about meta-issues are identified: the non-anchored, anchored comments, anchored arguments, and anchored discussions. It is found that modules like the ones designed in the present study may cause some changes in students’ views of mathematics on a content specific level as well as in the way the students hold their beliefs. In particular it is found that the students’ beliefs seem to grow in consistency and that the students’ desire to justify and exemplify their beliefs increases over the one year period of the study.

Finally, the findings and the performed data analyses are used to pose and answer a number of additional and relevant questions as well as to pose further questions which may not be answered based on the performed investigations. 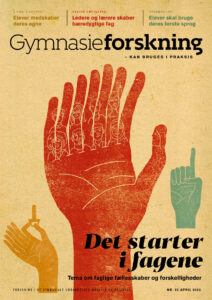